In a time when exposure to alcohol, tobacco and drugs in media is almost inevitable, it is important to understand how these often persuasive messages affect children. Many advertisements, movies, magazines, video games, and TV shows portray the use of these substances as commonplace, acceptable and even cool. Research shows that certain types of media can influence the way a child thinks about alcohol, tobacco and drug use, which in turn can affect their relationship with these substances.

How can media contribute to alcohol, tobacco, & drug use in children?

Today, there is a general consensus that frequent exposure to media containing substance use can lead to substance abuse in children and adolescents. Exposure to advertisements, movies and TV shows that depict substance use in a favorable light can influence child and teen behaviors around alcohol, tobacco and other drugs. The link between substance use in media and negative outcomes is largely due to the following: 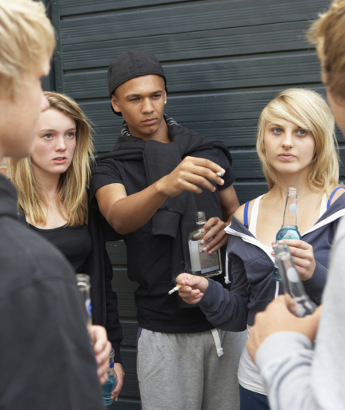 It is hard to limit your child’s exposure to alcohol and tobacco as print and screen advertisements are pervasive in today’s culture and depictions of substance use can be found in many TV shows, video games and movies aimed at children. What you can do is limit their access to developmentally inappropriate content by reading reviews, watching trailers and checking out the content first before allowing your children to watch and/or interact with it. Consuming media with your child can also help reduce the negative effects of substance abuse exposure, as you can explain the realities surrounding the attitudes and behaviors being depicted and answer any questions they may have.

In today’s often media saturated environment, teaching children to think critically about media is important. Critical thinking allows children to question the motivations behind different media depictions of substance use and how accurate they are. Children can also learn how to make their own anti-substance use messages in response to all of the manipulative pro-substance use messages they are exposed to.By teaching children that substance use in the media is often inaccurate and can be detrimental to their health, children will be less likely to accept what they see or hear as an indication or model for how they should behave.

Be aware of what you are watching and/or playing when your child is present. Know that even if the content seems to be appropriate, over exposure to substance use can affect children and teens actions. For older children, many music videos/lyrics, TV shows, video games and magazines contain glamorized images and behaviors that may negatively impact their views on alcohol, tobacco and drug use. Parental mediation, in which parents interact with their child while he or she is using media, can often help lead to discussions about the health, social and legal consequences of substance use with your children.