The following was written by Garth DeAngelis, a graduate student at Carnegie Mellon’s Entertainment Technology Center.  To learn more about this project, see the team’s blog. 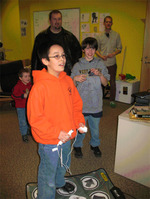 In the past 20 years, the percentage of overweight adolescents in the United States has more than doubled —  nearly 30% of American children today are considered obese or overweight. There are numerous reasons for this disturbing fact, but our team is striving to address one of them: the sedentary nature of video games.

There is an unfortunate correlation between the increase in child obesity and the popularity of video games. In 1999, the average child played video games for 29 minutes a day. According to the Entertainment Software Association (ESA), that number has more than doubled to approximately 63 minutes per day in 2007.  What can be done about this?

Since the 1980s, products have been released that merged movement and gaming such as Nintendo’s Power Pad (see original commercial) and Dance Dance Revolution (see DDR champs in action).   However, there has never been an “exergame” that combined traditional elements of gaming with active “exercise-based” inputs to create an immersive story with free exploratory navigability in an open world in the vein of a Zelda or Dungeons & Dragons epic.

The success of the Nintendo Wii (see demo) led us to believe that a game could be created that would combine exercise and fantasy worlds.  After meeting with medical experts at University of Pittsburgh’s Medical Campus, they recommended designing a way to increase a child’s heart rate when playing. We immediately thought of the success of the DDR dance pad. After extensive research, we couldn’t find any other game that re-designed the dance pad to be used for a non-dancing/simulation game.

We knew we could literally place the child in a video game hero’s shoes by re-purposing the foot pad. To make our hero jump over a chasm while being chased by a menacing enemy, the player will jump in their living room; when our hero unleashes a three-step melee combo on an antagonist, the player will not only swing their arms, but move their feet in conjunction to mimic the attack of their avatar. The child will be actively engaged in a traditional action-adventure experience, but their mind will be focused in the ‘flow’ of gameplay, not on burning calories. We believe this can be done precisely with our project, The Winds of Orbis: An Active-Adventure.

Our goal is not to supplant traditional exercise or sports activities. Rather, we hope to replace the sedentary 30 to 60 minutes a day that the average child spends sitting on the couch moving only their thumbs with an experience that will encourage them to stand up, move, and sweat while playing the type of game they already love with a smile on their face.